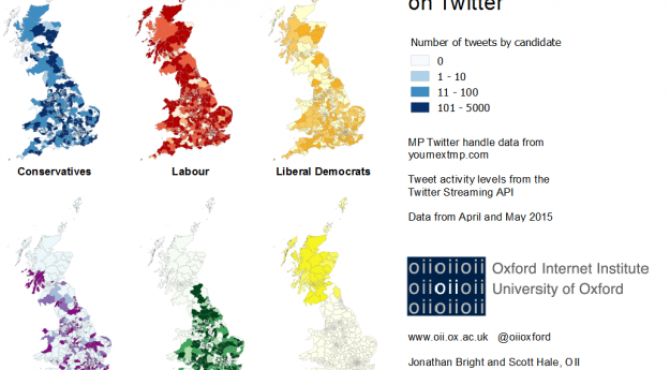 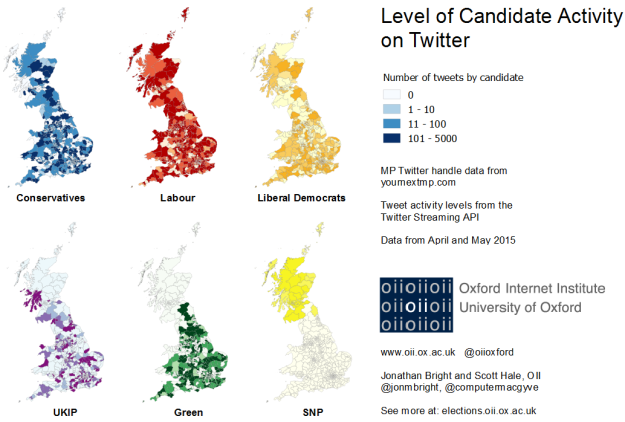 In the run-up to the general election we conducted a number of investigations into relative candidate and party use of social media and other online platforms. The site elections.oii.ox.ac.uk has served as our hub for elections-related data analysis. There is much to look over, but this blog post can guide you through.

“What if mentions were votes?” by Jonathan Bright and Scott Hale

“Which parties are having the most impact on Twitter?” by Jonathan Bright and Scott Hale

“The (Local) General Election on Twitter” by Jonathan Bright

“Where do people mention candidates on Twitter?” by Jonathan Bright

“Which parties were most read on Wikipedia?” by Jonathan Bright

“Does anyone read Wikipedia around election time?” by Taha Yasseri

“What does it mean to win a debate anyway?: Media Coverage of the Leaders’ Debates vs. Google Search Trends” by Eve Ahearn

“Could social media be used to forecast political movements?” by Jonathan Bright

“Social Media are not just for elections” by Helen Margetts