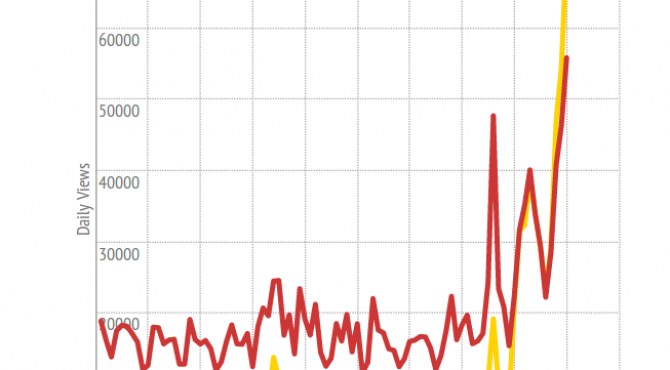 My colleague Taha Yasseri and I are currently working on a Fell Fund project on social media data and election prediction, looking especially at data from Google and Wikipedia (first paper out soon; will also be presenting on that at IPP 2014 which should be great). As part of that we thought we’d have a bit of fun looking at Scotland’s independence referendum on Wikipedia.

For election prediction the method is relatively straightforward: examine readership stats on the party Wikipedia pages of the country in question, and see which page is read the most (of course that doesn’t correspond straight away to election results – would that life were so simple – and the idea of the project is to see what corrections and biases need to be accounted for to make it work). It isn’t quite so clear how to do that for Scotland, but (just for fun really) we compared the following pages:

First we look at the UK and Scotland -> interesting how Scotland has leapfrogged the UK in the last days of the independence campaign. Points to a yes victory?

In terms of flags, though, the Union Jack is well ahead of the Saltire, peaking in the last few days. Is it a last minute outbreak of unionism?

In terms of national dishes, meanwhile, Haggis has been dominating Fish and Chips for the full period of the campaign, with interest in Haggis especially spiking in the last couple of days.

Well, one of these graphs will predict the winner of the referendum: we just don’t know which one 😉

More seriously, I think its interesting how most of these terms are spiking in the days before the vote, showing again how the social web really responds to political events.

UPDATE: Taha has passed me the comparison of the Yes and No campaign pages, as below. Yes for a narrow win following months of No dominance – you heard it here first. 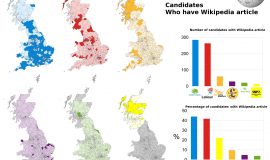