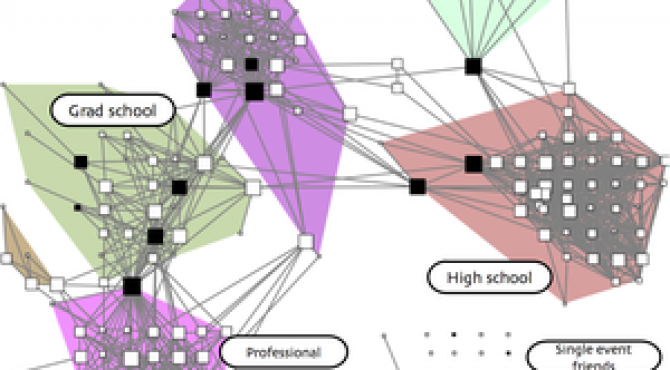 Recently on the social media collective blog, danah boyd set off a firestorm by suggesting that the imposition of real names on social media sites is an abuse of power…or even authoritarian. The obvious retort is “don’t like it, don’t use it”, or learn how to segement one’s network (i.e. bend to the system, because its your problem).

I once had a dream that people could seamlessly manage their social networks on any site through some combination of visulaization and clever user interfaces. It was based on the visualization of Facebook networks. People who see these networks, as I’ve discovered in many interviews (early work discussed here), readily identify the myriad social contexts in their networks. One cluster is clearly family, another is clearly coworkers, and so forth. As such, it seemed like the next step would be to use this information to create some sort of selective sharing interface. These are Google+’s social circles (or Diaspora’s Aspects), except determined semi-automatically. Then one could simply select which context, and read from it, or post to it. 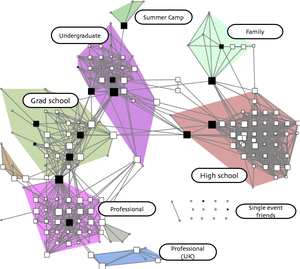 This is “the myth of selective sharing” (as Marc Smith calls it). Its an engineer’s dream based on a misunderstanding of the key distinction between offline and online life. Offline we assume that our conversations are not encoded and thereafter available to people outside of our immediate audience, by default. Yes, some lucky people give talks to large audiences, they get on the radio or tv. Most don’t. But everyone has some reason to share things with one person but not another. We don’t need to go as far as whistle blowers, political dissidents or closet cases in religious areas. Lots of people have grievances with their bosses, or find someone else attractive, or have problem students / subordinates they need advice on. Lots of people need advice on their own issues, be it alcoholism, drug abuse or gambling. When people do this offline, they do it in situations: temporally and spatially bounded contexts for action. The pub after work; the patio over a cup of coffee; the closed door meeting.

But what do we mean by offline anymore? Some assume it is when they are not searching and browsing the web? Or when they aren’t streaming video, emailing someone or inside a virtual world. Being offline actually refers to a much more limited space than that. Being online is being encoded and having that which is encoded available to some party other than those immediately present. You are not online when you are in front of a computer – you are online when your actions are being digitized and networked. Online is on-the-record. Offline is off-the-record.

Offline people say things appropriate to the group they are in. That doesn’t mean they are two-faced, insincere or liars. It means people are context aware. People observe walls, clocks, furniture, fashion and music. These things guide us as to the appropriate way of acting. The guy writing his novel at the bar on Friday night is out-of-place. The guy who shows up to work drunk on Monday morning has a problem. Offline people don’t have to worry about their real name, because their behavior is tied to the context and the impressions the foster in that context. In fact, I’ll say that even more strongly – if your speech is not confined to the context you are in – but available to a potentially unknowable audience – you are online.

This is why real name sites are necessarily inadequate. They deny individuals the right to be context-specific. They turn the performance of impression management into the process of curation. Facebook curates through the top news feed, Twitter does it through lists and Google+ through some confusing (and as far as I can tell, failing) social circles model. Impression management means selectively presenting an idealized version of one’s self specific to that context. Curation means selecting objects for display. So if you don’t think that being context-specific is a right, consider what you think the ‘free’ means in the right to free speech. When my speech is necessarily encumbered by a tethering to a single all-encompassing key (the real name) that unlocks whatever I say, I am no longer free to address one specific context and not another one. I am engaging in a trust relationship with the curator, but I am not free to say what I want. Sometimes that relationship fails, sometimes its out of my control (when others post on my behalf, tag me, etc…)

Of course, this applies most strongly to non-addressed spaces. When I address someone in an email or on the phone, I am still online, but I’m not necessarily subject to curation. I send a message to a specific recipient, I expect that recipient to get the message, not have gmail decide (but even then spam is filtered out through some curation). On the other hand, when I submit content to social media sites, I do not have a clear view of who is, or will see it, outside of some vague notion of friend lists.

Pseudonyms have long been a way out of this situation. Someone might have one name for an anonymous support group, another for a group of bi-curious and closeted individuals (or just for sex in general), another for a message board about programming, and one for politics or political action. If these were mine, then the choice to blend them or keep them separate is mine. Real names and third-party curation takes away that choice. In their place they offer many advantages, but freedom is not one of them. And that’s why the imposition of one name, one network for all is an abuse of power. It says not only is the curator better at deciding who you should read your content than you, the curator won’t even give you the choice to begin with.