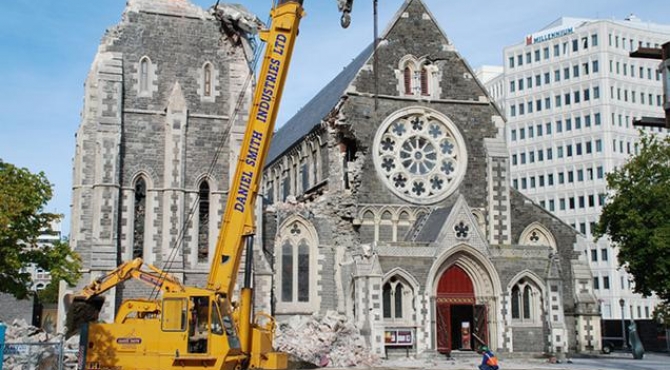 We talk to Paul Millar, project leader of the CEISMIC Canterbury Earthquakes Digital Archive project about the role of digital humanities in preserving the digital record of the impact of the earthquake that struck Canterbury, NZ, in February 2011. Huge amounts of important information are lost in the chaos following a major disaster: Paul is leading efforts to record and preserve it as a unique resource for future scholarship.

The 6.2 magnitude earthquake that struck the centre of Christchurch on 22 February 2011 claimed 185 lives, damaged 80% of the central city beyond repair, and forced the abandonment of 6000 homes. It was the third costliest insurance event in history. The CEISMIC archive developed at the University of Canterbury will soon have collected almost 100,000 digital objects documenting the experiences of the people and communities affected by the earthquake, all of it available for study.

The Internet can be hugely useful to coordinate disaster relief efforts, or to help rebuild affected communities. Paul Millar came to the OII on 21 May 2012 to discuss the CEISMIC archive project and the role of digital humanities after a major disaster (below). We talked to him afterwards.

Ed: You have collected a huge amount of information about the earthquake and people’s experiences that would otherwise have been lost: how do you think it will be used?

Paul: From the beginning I was determined to avoid being prescriptive about eventual uses. The secret of our success has been to stick to the principles of open data, open access and collaboration — the more content we can collect, the better chance future generations have to understand and draw conclusions from our experiences, behaviour and decisions. We have already assisted a number of research projects in public health, the social and physical sciences; even accounting. One of my colleagues reads balance sheets the way I read novels, and discovers all sorts of earthquake-related signs of cause and effect in them. I’d never have envisaged such a use for the archive. We have made our ontology is as detailed and flexible as possible in order to help with re-purposing of primary material: we currently use three layers of metadata — machine generated, human-curated and crowd sourced. We also intend to work more seriously on our GIS capabilities.

Ed: How do you go about preserving this information during a period of tremendous stress and chaos? Was it difficult to convince people of the importance of this longer-term view?

Paul: There was no difficulty convincing people of the importance of what we were doing: everyone got it immediately. However, the scope of this disaster is difficult to comprehend, even for those of us who live with it every day. We’ve lost a lot of material already, and we’re losing more everyday. Our major telecommunications provider recently switched off its CDMA network — all those redundant phones are gone, and with them any earthquake pictures or texts that might have been stored. One of the things I’d encourage every community to do now is make an effort to preserve key information against a day of disaster. If we’d digitised all our architectural plans of heritage buildings and linked them electronically to building reports and engineering assessments, we might have saved more.

Ed: It seems obvious in hindsight that the Internet can (and should be) be tremendously useful in the event of this sort of disaster: how do we ensure that best use is made?

Paul: The first thing is to be prepared, even in a low-key way, for whatever might happen. Good decision-making during a disaster requires accurate, accessible, and comprehensive data: digitisation and data linking are key activities in the creation of such a resource — and robust processes to ensure that information is of high quality are vital. One of the reasons CEISMIC works is because it is a federated archive — an ideal model for this sort of event — and we were able to roll it out extremely quickly. We could also harness online expert communities, crowd-sourcing efforts, open sourcing of planning processes, and robust vetting of information and auditing of outcomes. A lot of this needs to be done before a disaster strikes, though. For years I’ve encountered the mantra ‘we support research but we don’t fund databases’. We had to build CEISMIC because there was no equivalent, off-the-shelf product — but that development process lost us a year at least.

Ed: What equivalent efforts are there to preserve information about major disasters?

Paul: The obvious ones are the world-leading projects out of Center for History and New Media at George Mason University, including their 9/11 Digital Archive. One problem for any archive of this nature is that information doesn’t exist in a free and unmediated space. For example, the only full record of the pre-quake Christchurch cityscape is historic Google Street View; one of the most immediate sources of quake information was Twitter; many people communicated with the world via Facebook, and so on. It’s a question we’re all engaging with: who owns that information? How will it be preserved and accessed? We’ve had a lot of interest in what we are doing, and plenty of consultation and discussion with groups who see our model as being of some relevance to them. The UC CEISMIC project is essentially a proof of concept — versions of it could be rolled out around the world and left to tick over in the background, quietly accumulating material in the event that it is needed one day. That’s a small cost alongside losing a community’s heritage.

Ed: What difficulties have you encountered in setting up the archive?

Paul: Where do I start? There were the personal difficulties — my home damaged, my family traumatised, the university damaged, staff and students all struggling in different ways to cope: it’s not the ideal environment to try and introduce a major IT project. But I felt I had to do something, partly as a therapeutic response. I saw my engineering and geosciences colleagues at the front of the disaster, explaining what was happening, helping to provide context and even reassurance. For quite a while I wondered what on earth a professor of literature could do. It was James Smithies – now CEISMIC’s Project Manager – who reminded me of the 9/11 Archive. The difficulties we’ve encountered since have been those that beset most under-resourced projects — trying to build a million dollar project on a much smaller budget. A lot of the future development will be funding dependent, so much of my job will be getting the word out and looking for sponsors, supporters and partners. But although we’re understaffed, over-worked and living in a shaky city, the resilience, courage, humanity and good will of so many people never ceases to amaze and hearten me.

Ed: Your own research area is English Literature: has that had any influence on the sorts of content that have been collected, or your own personal responses to it?

Paul: My interest in digital archiving started when teaching New Zealand Literature at Victoria University of Wellington. In a country this small most books have a single print run of a few hundred; and even our best writers are lucky to have a text make it to a second edition. I therefore encountered the problem that many of the texts I wanted to prescribe were out of print: digitisation seemed like a good solution. In New Zealand the digital age has negated distance — the biggest factor preventing us from immediate and meaningful engagement with the rest of the world. CEISMIC actually started life as an acronym (the Canterbury Earthquakes Images, Stories and Media Integrated Collection), and the fact that ‘stories’ sits centrally certainly represents my own interest in the way we use narratives to make sense of experience. Everyone who went through the earthquakes has a story, and every story is different. I’m fascinated by the way a collective catastrophe becomes so much more meaningful when it is broken down into individual narratives. Ironically, despite the importance of this project to me, I find the earthquakes extremely difficult to write about in any personal or creative way. I haven’t written my own earthquake story yet.