Preparing for the Zombie Apocalypse, Part II: Brains or Salads? 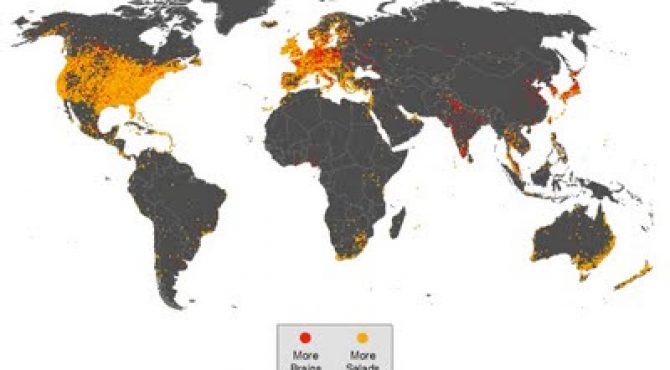 Following our first post on understanding the coming zombie apocalypse, we thought it pertinent to pose, and attempt to answer, another set of questions using the collective wisdom of the geoweb. While our earlier post sought to understand the spatial dynamics of the zombie apocalypse by finding where there were relative concentrations of references to “zombies” and “old people”, we all know that a healthy supply of food is an important factor to consider when staking out places to hide from zombies.

We all know that zombies eat human brains. It’s almost so widely accepted that I just wasted 15 seconds typing these two sentences. So what is the opposite of the human brain? The exact thing that zombies would not, under any circumstances, have any interest in consuming? The answer: salad. Why on earth would zombies want to eat salad? It makes no sense. Presuming this fact to be true, we can measure the relative concentrations of references to “brains” and “salads” in order to know where might be good places to avoid, and where might be good places to hide out in the case of the zombie apocalypse. Or, in a less dire scenario, where there might be lots of vegetarian restaurants to eat at next weekend.

References to Brains and Salads Worldwide 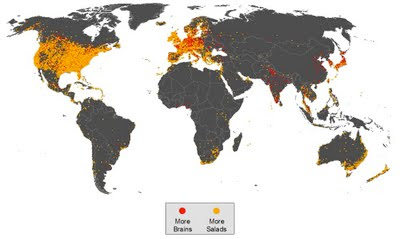 At the global scale, the distribution of brains and salads appears to heavily favor salads. This is especially good news for most of the United States, South Africa, Australia and New Zealand, and some pockets of Europe. Japan and China, however, appear to have much higher concentrations of brains, making them ripe for future zombie attacks. Who knew that all of that focus on education could end up being a bad thing? However, because continental Europe displays such variability, it is important to take a closer look at how brains and salads are distributed.

References to Brains and Salads in Europe 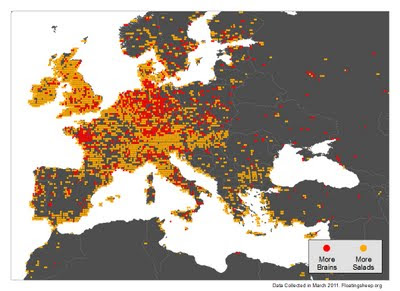 There appear to be a few patterns worth mentioning. First, coastal areas appear to be more secure given the prevalence of salads in coastal areas across most of Europe. While there is no clear cause for this, it seems plausible that it could be because coastal areas present more opportunity for fleeing from zombies, since water poses a considerable obstacle to the undead.

Second, there appears to be a clustering of brains in the Normandy region of France and in parts of Germany. While this contradicts our earlier finding that France and Germany are seemingly safe from the zombie apocalypse given the large number of old people, perhaps our shot in the dark about zombies masking their presence in these places was more founded in evidence than we suspected. Probably best to avoid anyone over the age of 25, just to be safe.

Given the smattering of brains across the continent, it appears that no place is entirely safe from the zombies. It’s also worth noting that just because there are more salads than brains in a location does not mean there are no brains worth consuming. Just because zombies don’t receive as much payoff in these areas doesn’t mean they can’t make their way there should all other tasty cerebral resources be exhausted.

And you thought Mad Cow disease was bad…