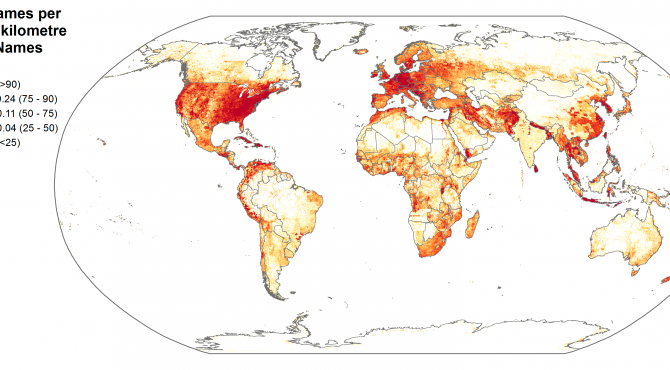 Spatial distribution of placenames in the GeoNames gazetteer

Spatial distibution of placenames in GeoNames included in the dataset of populated places with more than a thousand inhabitants, compared to the spatial distribution of population

Stefano and I have put together a short paper that will be forthcoming in Environment and Planning A. The paper focuses on the geography of geographic information, and builds on our work into the uneven geographies of information. It highlights how the very information systems that we use as ‘ground-truth’ are themselves characterised by significant biases.

Gazetteers are dictionaries of geographic placenames that have important implications far beyond the worlds of geographers and cartographers. By containing ‘definitive’ lists of places, gazetteers have the ontological power to define what will and won’t be geocoded and represented in databases, maps, search engines, and ultimately our spatial understandings of place.

This paper focuses attention on GeoNames, which is the world’s largest freely available and widely used gazetteer. We illustrate how content in GeoNames is characterised by highly uneven spatial distributions. There are dense clusters of placenames in some parts of the world and a relative absence of geographic content in others. These patterns are related to not just the wealth and population-size of a country, but also its policies on internet access and open data. The paper then traces some of the specific implications of this information inequality: showing how biases in gazetteers are propagated in a variety of geographic meaning-making.

Graham, M. and De Sabbata, S. 2016. Mapping Information Wealth and Poverty: The Geography of Gazetteers. Environment and Planning A. (in press).

Note: This post was originally published on the OII's Geonet project blog on 31 March 2015 2:31 pm. It might have been updated since then in its original location. The post gives the views of the author(s), and not necessarily the position of the Oxford Internet Institute.