“internet” vs. “Internet”: The Consequence of Capitalization 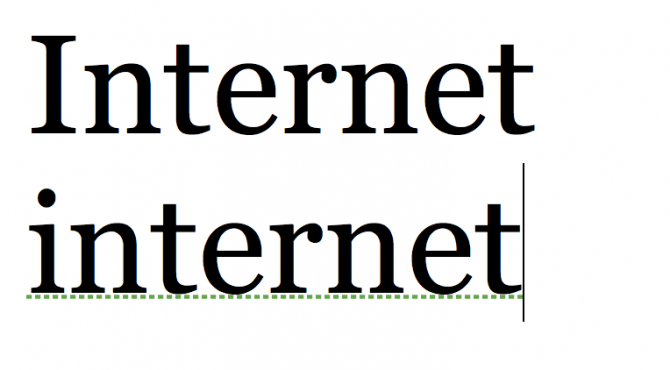 Read enough about digital developments and you’re bound to run into a subtle inconsistency: the capitalization of the word “internet.” Some scholars do, some scholars don’t. This may lead you to ask a fairly natural question: which version is right?

Many default to “Internet” with a capital “I,” but this choice is far from universal. The New York Times, Chicago Manual of Style, and AP swear by the capital letter. The Guardian, the Economist, and Wired do not. Commentaries and academic articles vary, as do personal blogs and social media posts (themselves perhaps governed by a different sort of lexical logic). Even (or perhaps especially) on the Internet, there’s no consistent standard for how we treat the word “internet.”

What may seem trivial at the outset bears a number of implications. Wired touched upon some of these in an explanation of the publication’s decision to de-capitalize “internet” in 2004 (along with “web” and “net”). The logic put forth by Tony Long, copyeditor of Wired, is this:

“In the case of internet, web and net, a change in our house style was necessary to put into perspective what the internet is: another medium for delivering and receiving information. That it transformed human communication is beyond dispute. But no more so than moveable type did in its day. Or the radio. Or television.”

This is, essentially, the central argument by those who favor the use of the lowercase. The internet is just another medium. Capitalization not only artificially amplifies its differences but also does not acknowledge its embedded-ness within the everyday.

Some might argue both are correct. Internet and internet just refer to two different things. There are a number of words that function in this manner; see herb vs Herb, march vs March, and may vs May for examples. We might argue that all words undergo some transformation in meaning when capitalized, though in some cases the change might be fairly superficial. We capitalize to confer Importance, to signify Otherness, or to create a Term for imminent use.

The choice may also have nothing to do with change in meaning, instead signifying something political. danah boyd, in writing about her own decision to forgo the uppercase, argues that capitalization (in the case of names and pronouns) superficially empowers what might ultimately be thought of as just another adjective and embodies a sort of self-righteousness. She also provides us this choice Douglas Adams quote: “Capital letters were always the best way of dealing with things you didn’t have a good answer to.”

The issue of politicizing terminology links back to why the decision to hold down the shift bar is so important. We live in a culture that not only problematizes the Internet on a frequent basis, with claims of teenagers corrupted and anonymity either destroying or being destroyed, but also frequently treats said medium as a cognizant singular entity.  Certain cases may merit the latter generalization (documentation of a particular culture that identifies itself as the Internet, for instance). Outside of these circumstances, however, these dialogues reinforce our understanding of the Internet as an exceptional case. This can be used as a conscious or implied excuse from probing too deeply into the very issues being discussed. We shrug and say something to the effect of, “Oh, well, it’s the Internet.” And such excuses, if prevalent enough, can lead to a dearth of critical thinking.

Some believe that the Internet is, indeed, exceptional, and that treating it as such is the right thing to do. This is a matter separate from capitalization that merits discussion in its own right.  To ignore the ways that the Internet is fundamentally different from prior forms of media is foolish; to assume that similar claims have never been made about a medium’s revolutionary capabilities, however, is similarly silly. Without coming down on exceptionalism, then, we may revert to decision-making case by case. In each utterance then, we ask: is the Internet really so different? When I chat on Skype as I would on the phone, does the internet warrant capitalization? When people identify themselves as being from the Internet, surely it must. When the internet is used for watching TV or organizing social events, though, what’s the call? Where do we draw the line?

The debate over the larger questions surrounding our dialogues about the internet persist. When it comes to our writing, however, we ought to consciously consider the difference that a capital letter might make. Resorting to rote capitalization likely contributes to the types of simplistic dialogues about our technological future that are most problematic: those that objectify the medium and refuse to burrow into the processes occurring with it and through it. The way we use our words can be exceptionally meaningful. Punctuate and capitalize with care.

Editor’s Note: Rough Consensus is returning with commentary from both current students and alumni of the Oxford Internet Institute. Check back in the coming weeks for opinions and updates on Internet Scholarship in progress.