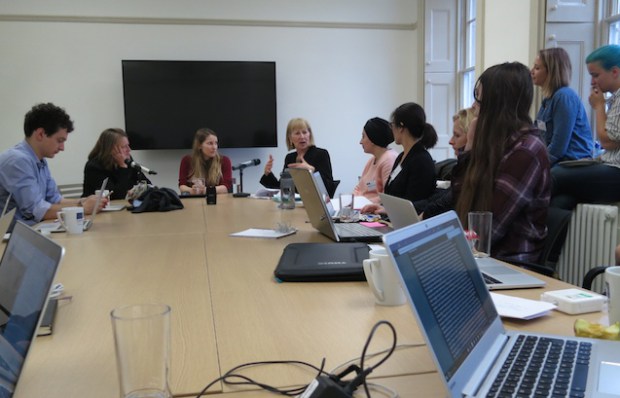 To encourage new ways of thinking about the problem of sexism in daily life, the OII’s recent Everyday Sexism Datahack brought together twenty people from a range of disciplinary backgrounds to analyse the written accounts of sexism and harassment gathered by the Everyday Sexism project. Founded by Laura Bates in 2012, Everyday Sexism has gathered more than 120,000 accounts submitted by members of the public.

A research team at the OII has already been analysing the content, and provided cleaned data to the datahack participants that could be analysed through qualitative and quantitative methods. Following an introduction to the project by Laura Bates, an outline of the dataset by Taha Yasseri, and a speed-networking session led by Kathryn Eccles we fell into two teams to work with the data.

Our own group wanted to examine the question of how people interact with the threat of public space. We were also interested in how public space is divided between online and offline, and the social perception of being online versus offline. We wanted to explore what sorts of reactions people might have to examples of assault, or strategies or things they might do in response to something happening to them — and how they might differ online and offline.

We spent the first hour collecting keywords that might indicate reactions to either online or offline harassment, including identifying a perceived threat and coping with it. We then searched the raw data for responses like “I tried to ignore it” “I felt safe / unsafe” “I identified a risk” “I was feeling worried, feeling anxious or nervous“; and also looked at online versus offline actions. So for online action we were looking for specific platforms being named, and people saying things like “comment, response, delete, remove” in relation to social media posts. For offline we were looking for things like “I carried a [specific item]” or “I hid or avoided certain areas“ or “I walked faster” (etc.).

We wanted to know if we could apply ideas of responses to offline space back to online spaces, and how these online spaces fall short. Offline responses are often very individual, whereas you might not have such a direct and individual response to something like a Facebook ad. Taking into account the important caveat that this was just a quick exploration of the data — and that the data were indicative rather than representative (so should in no way be used to extrapolate or infer anything concrete) one of the biggest things we found was that while in the offline examples of responses to harassment there was quite a lot of action, like running away, or hiding in shops and restaurants, there were very few examples to responses in the online examples.

Though it actually turned out to be difficult to identify a clear division between online/offline contexts in the data: we saw accounts of people who were online on social media encountering something sexist and logging off, and then walking in the street and getting harassed. But it seemed like people were more likely to report something offline to the police than in online forums. And this contrast is very interesting, in terms of whether you can be an active agent in response to something, or whether there’s something about being online that positions you as being passive and unable to respond — and what we can do about that.

While we found it difficult to quantify, we did wonder if people might not be giving themselves credit for the kinds of responses they have to examples of sexism online — maybe they aren’t thinking about what they do. Whereas offline they might say “I ran away, because I was so scared” perhaps when it’s online, people just read it and not respond; or at least not report responses to the same extent. There were lots of complaints about images, or hypocrisy about Facebook’s enforcement of community standards (such as allowing rape jokes, but deleting pictures of breast-feeding), and other things like that. But the accounts don’t say if they reported it or took action.

This is strange because in cases of offline harassment in the street, where it escalates into something physical like a fight, women are often at a disadvantage: whereas in the online context women ought to have more leverage — but it does’t seem like reporting is being done. When we examined the themes of how people reacted online, we further differentiated between removing the source of a sexist comment (such as unfriending, unfollowing, muting, deleting) and removing the self (such as going offline, or removing yourself from the platform). It seemed that removing the source was generally more common than removing the self.

So people might simply be normalising the idea that misogyny and sexism is going to exist in forums. In the data someone had reported someone on Twitter saying “Well if you’re on Twitter you’re asking for it” — indicative of a “short-skirt” line of thinking about engaging on social media. In this environment people might see unfollowing and unfriending as a form of management and negotiation, as opposed to a fundamental problem with the site itself. It would be interesting to explore the self-censoring that happens before anything happens: quite a few of the examples we read opened with “I wasn’t even wearing anything provocative, but [this] happened..”. And it would be interesting to know if people also think like that in the online context: “I wasn’t even participating in a controversial way, but this still happened”. It’s an interesting parallel, maybe.

Note: This post was originally published on the OII's Policy and Internet blog on 24 February 2017 2:00 pm. It might have been updated since then in its original location. The post gives the views of the author(s), and not necessarily the position of the Oxford Internet Institute.