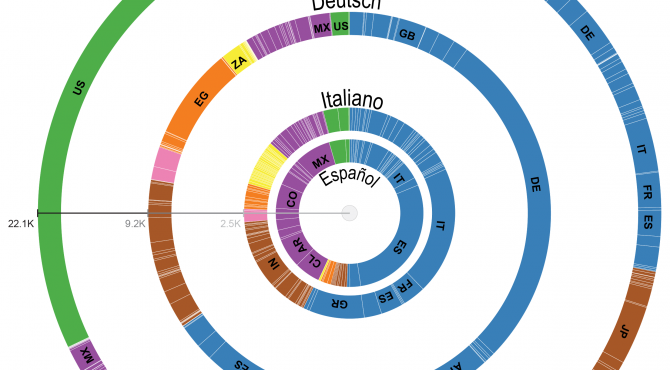 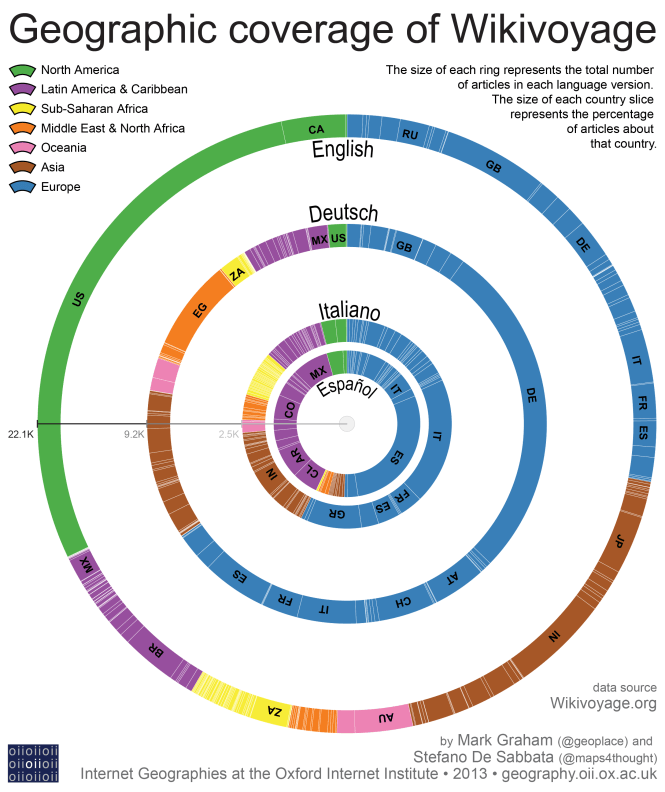 The visualisation shows us that, in all four languages, extensive coverage exists of countries in which those languages are spoken. Wikivoyage — one of the world’s most used travel guides — therefore presents us with a very selective picture of the world.

In other words, despite the fact that WikiVoyage is by its nature a project designed to facilitate writing about distant parts of the world that people might travel to, people aren’t actually writing that much content about places in which the language that they speak isn’t widely spoken (notable exceptions being content about Egypt in German, and about Greece in Italian, which account for more than 4% of the respective guides).

Low-income countries are particularly under-represented by the English, German, and Italian projects, with only about one third of articles in those languages dedicated to countries outside Europe, North America, Australia, and New Zealand. The Spanish Wikivoyage, in contrast, devotes almost 40% of its content to the Latin America and Caribbean region (as Spanish is widely spoken in that region, and it is possible that a significant number of editors are writing from the region). Sub-Saharan Africa, in contrast, is heavily under-represented in the Spanish WIkivoyage, comprising only 0.1% of the collection.

As ever more people use online travel guides, it will be important to understand whether these inequalities in information begin to actively shape where and how people move around the world.

To determine to location of each article, we used WikiVoyage’s internal geographic hierarchy. The page on Blackburn, for instance, is nested within the categories of Lancashire, and the United Kingdom. English and German have been included as they are the two largest sub-projects in Wikivoyage according to WikiMedia Statistics. We selected Italian and Spanish because they respectively represent good examples of geographically concentrated and dispersed languages.