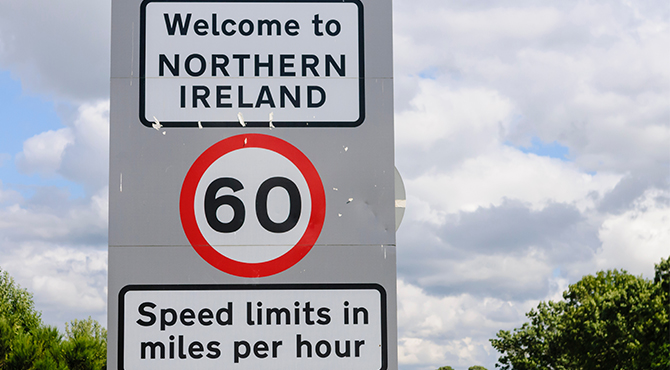 In this post, Helen Margetts, Cosmina Dorobantu, Florian Ostmann, and Christina Hitrova discuss the focus on ‘technological solutions’ in the context of the Irish border debate — arguing that it is becoming a red herring and a distraction from the political choices ahead. They write:

Technology is increasingly touted as an alternative to the Irish backstop, especially in light of the government’s difficulty to find a Brexit strategy that can command a majority in the House of Commons. As academics, we have been following the debate around the role of technology in monitoring the border with interest, but also scepticism and frustration. Technology can foster government innovation in countless ways and digital technologies, in particular, have the potential transform the way in which government makes policy and designs public services. Yet, in the context of the Irish border debate, the focus on ‘technological solutions’ is becoming a red herring and distracts from the political choices ahead. Technology cannot solve the Irish border problem and it is time to face the facts.

Any legal or regulatory restrictions on the movement of goods or people between the UK and the Republic of Ireland post-Brexit will make border-related friction inevitable. Setting the restrictions is a matter of political agreements. Technology can help enforce the legal or regulatory restrictions, but it cannot prevent the introduction of friction compared to the status quo. For example, technology may speed up documentation, processing, and inspections, but it cannot eliminate the need for these procedures, whose existence will mean new burdens on those undergoing them.

2:  There will be a need for new infrastructure at or near the border

Technology may make it possible for some checks to be carried out away from the border. For example, machine learning algorithms can assist in identifying suspicious vehicles and police forces can stop and inspect them away from the border. Regardless of where the relevant inspections are carried out, however, there will be a need for new infrastructure at or near the border, such as camera systems that record the identity of the vehicles crossing the frontier. The amount of new infrastructure needed will depend on how strict the UK and the EU decide to be in enforcing restrictions on the movement of goods and people. At a minimum, cameras will have to be installed at the border. Stricter enforcement regimes will require additional infrastructure such as sensors, scanners, boom barriers or gates.

3: ‘Frictionless’ solutions are in direct conflict with the Brexit goal to ‘take back control’ over borders

There is a fundamental conflict between the goals of minimising friction and enforcing compliance. For example, friction for Irish and UK citizens traveling across the Irish border could be reduced by a system that allows passenger vehicles registered within the Common Travel Area to cross the border freely. This approach, however, would make it difficult to monitor whether registered vehicles are used to facilitate unauthorised movements of people or goods across the border. More generally, the more effective the border management system is in detecting and preventing non-compliant movements of goods or people across the border, the more friction there will be.

Many of the ‘technological solutions’ that have been proposed as ways to minimise friction have blind spots when it comes to monitoring and enforcing compliance – a fact quietly acknowledged through comments about the solutions’ ‘dependence on trust’. Automated licence plate recognition systems, for example, can easily be tricked by using stolen or falsified number plates. Probabilistic algorithmic tools to identify the ‘high risk’ vehicles selected for inspections will fail to identify some cases of non-compliance. Technological tools may lead to improvements over risk-based approaches that rely on human judgment alone, but they cannot, on their own, monitor the border safely.

5: Government will struggle to develop the relevant technological tools

Suggestions that the border controversy may find a last-minute solution by relying on technology seem dangerously detached from the realities of large-scale technology projects, especially in the public sector. In addition to considerable expertise and financial investments, such projects need time, a resource that is quickly running out as March 29 draws closer. The history of government technology projects is littered with examples of failures to meet expectations, enormous cost overruns, and troubled relationships with computer services providers.

A recent example is the mobile phone app meant to facilitate the registration of the 3.7 million EU nationals living in the UK that cannot work on iPhones. Private companies will be keen to sell technological solutions to the backstop problem, with firms like Fujitsu and GSM already signalling their interest in addressing this technological challenge. Under time pressure, government will struggle to evaluate the feasibility of the technological solutions proposed by these private providers, negotiate a favourable contract, and ensure that the resulting technology is fit for purpose.

Technological tools can help implement customs rules, but they cannot fill the current political vacuum. The design, development, and implementation of border management tools require regulatory clarity—prior knowledge of the rules whose monitoring and enforcement the technical tools are meant to support. What these rules will be for the UK-Ireland border following Brexit is a political question. The recent focus on ‘technological solutions’, rather than informing the debate around this question, seems to have served as a strategy for avoiding substantive engagement with it. It is time for government to accept that technology cannot solve the Irish border problem and move on to find real, feasible alternatives.

Disclaimer: The views expressed in this article are those of the listed members of The Alan Turing Institute’s Public Policy Programme in their individual academic capacities, and do not represent a formal view of the Institute.