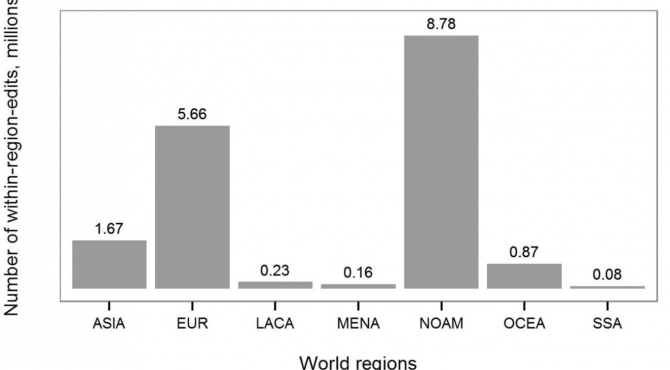 An earlier post showed how different parts of the world have very different levels of engagement with local content in Wikipedia. The data presented there showed that a majority of content about North America and Europe are created in those regions, whilst only a small minority of content about Latin America, the Middle East and North Africa (MENA), and Sub-Saharan Africa is created locally.

Why then, does Sub-Saharan Africa have such a low overall percentage of locally contributed content? The answer is a simple one. 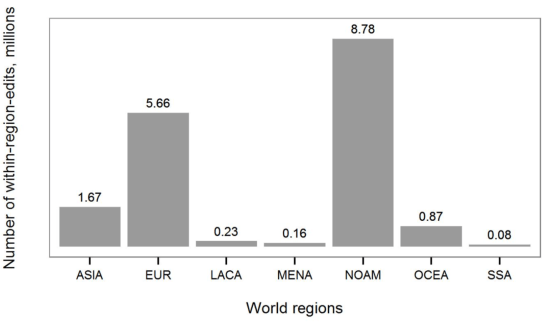 The graph above shows the absolute number of within-region-edits (both anonymous and registered) to geolocated articles in the English-language Wikipedia, by world region. In terms of raw numbers, North America and Europe drastically outnumber the remaining world regions. Conversely, Latin America, MENA, and Sub-Saharan Africa all commit only a very small number of within-region-edits. What this means is that even a relatively small number of edits flowing into those regions from outside (i.e. allochthonous contributions) could easily drown out local voice from places like Sub-Saharan Africa: something we undoubtedly see happening.

Note: This post was originally published on the OII's Connectivity, Inclusion, Inequality  blog on 12 December 2014 12:52 am. It might have been updated since then in its original location. The post gives the views of the author(s), and not necessarily the position of the Oxford Internet Institute.