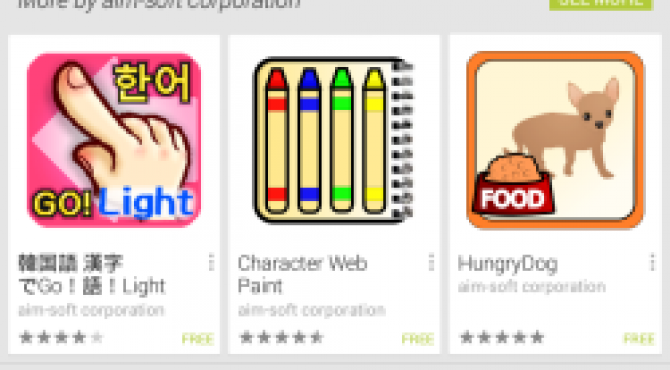 As I prepare my slides for CHI 2014, I’m struck by one implication I give for the research I will present on language and Twitter, “Allow each user to have a set of multiple preferred languages;” or, more simply:

This seems super-simple and obvious as a bullet point on my slides. However, a long list of well-known platforms easily illustrates this insight is often overlooked. Since the confines of my presentation won’t allow me to look in-depth at this, I thought I would write here about one common product which I feel could be designed better for multilingual users: the Google Play Store. It is by far not the only platform, but it is a well-known platform that I use often.

Consider the app shown on the left, which I recently installed on my tablet. This is a screen shot of the app as it appears in the Google Play Store on my tablet with my user-interface language set to English.

As the astute reader might guess, the missing reviews are written in Japanese, which is perfectly fine since I read Japanese (and even if I didn’t I could try machine translation). However, in order to see these reviews I must switch the user-interface language of my entire tablet (or change the Language Accept parameter of my browser after logging out of my Google account and clearing all cookies). I also need to know somehow that the missing reviews are in Japanese. If I want to check if a Korean user has reviewed the app, I have to yet again change the entire user-interface language of my tablet. If I don’t want all my other apps and the system software itself to be in Japanese, I then have to yet again change the user-interface language back to English after reading the reviews.

The image below and to the right is screen shot of the app in the Google Play store after I’ve changed the user-interface language of my tablet to Japanese. Note that all the text that was previously in English (Apps, Open, Uninstall) is now in the new user-interface language of Japanese. The top area of the information is the same (3.6 stars, 10,000+ downloads), but now a new section with Reviews (レブュー) is given (which I’ve put a second red box around for emphasis).

Google Play is fully internationalized and localized on the one hand: menus are translated, the design accommodates right-to-left languages, etc. The difficulty is in how user-generated content is handled (specifically user reviews of apps). More niche apps are often reviewed in only one language in Google Play. However, reviews are grouped by the user interface language settings of users’ devices. This means that a user cannot see reviews of an app in another language without temporarily changing the user interface language of the entire Android operating system—a process that takes several minutes and affects all apps on the device.

Confusingly, apps are rated with a number of stars (1-4) averaged across reviews from all languages. This can lead to the rather odd case discussed above where the English interface shows an average rating of 3.6 stars from 27 user reviews, but then gives no indication of how the user could see these reviews. This can be particularly frustrating for multilingual users who could read the reviews in another language if the option were provided. It is further the case that some users write a review in a language different from their user interface language (e.g., a user with a Japanese UI language writing a review of an app in English). These users may think they are helping potential users in the other language, but in fact those users are very unlikely to see the review as it remains only accessible to users with the same user interface language selection as the author of the review.

So, while the bullet point on my CHI slides to “design with multilingual users in mind” seems obvious and simple, there are many common platforms that do not follow this advice (Google Play is certainly not alone). This is particularly surprising given “multilingualism…[is] the norm for most of the world’s societies,” with over half of Europe and over a fifth of the US multilingual. My work on language and Twitter and Wikipedia shows that a non-trivial percentage of users on both platforms engage in multiple languages.

As many human-computer interaction researchers gather this week for CHI in a country with a strong tradition of multilingualism, I hope that those envisioning new platforms or redesigning existing platforms will consider multilingual users specifically in their designs.

Twitter trials 280 characters, but its success in Japan is more than a character difference
Multilingualism research featured in The Guardian