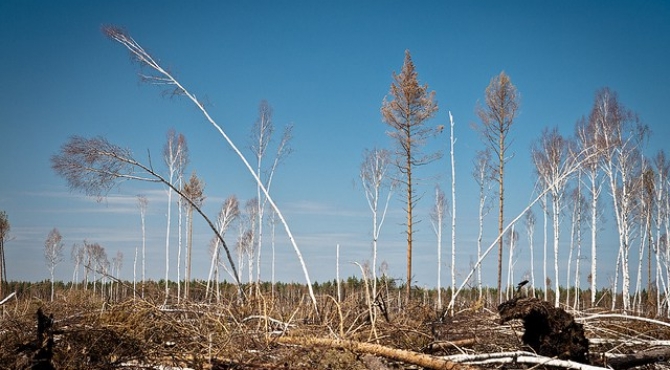 There is a great deal of interest in the use of crowdsourcing tools and practices in emergency situations. Gregory Asmolov‘s article Vertical Crowdsourcing in Russia: Balancing Governance of Crowds and State–Citizen Partnership in Emergency Situations (Policy and Internet 7,3) examines crowdsourcing of emergency response in Russia in the wake of the devastating forest fires of 2010. Interestingly, he argues that government involvement in these crowdsourcing efforts can actually be used to control and regulate volunteers from the top down — not just to “mobilize them”. 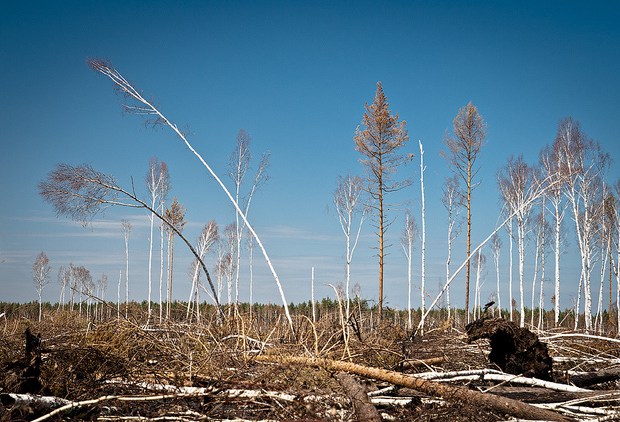 RUSSIA, NEAR RYAZAN – 8 MAY 2011: Piled up wood in the forest one winter after a terribly huge forest fire in Russia in year 2010. Image: Max Mayorov (Flickr).

My interest in the role of crowdsourcing tools and practices in emergency situations was triggered by my personal experience. In 2010 I was one of the co-founders of the Russian “Help Map” project, which facilitated volunteer-based response to wildfires in central Russia. When I was working on this project, I realized that a crowdsourcing platform can bring the participation of the citizen to a new level and transform sporadic initiatives by single citizens and groups into large-scale, relatively well coordinated operations. What was also important was that both the needs and the forms of participation required in order to address these needs be defined by the users themselves.

To some extent the citizen-based response filled the gap left by the lack of a sufficient response from the traditional institutions.[1] This suggests that the role of ICTs in disaster response should be examined within the political context of the power relationship between members of the public who use digital tools and the traditional institutions. My experience in 2010 was the first time I was able to see that, while we would expect that in a case of natural disaster both the authorities and the citizens would be mostly concerned about the emergency, the actual situation might be different.

Apparently the emergence of independent, citizen-based collective action in response to a disaster was considered as some type of threat by the institutional actors. First, it was a threat to the image of these institutions, which didn’t want citizens to be portrayed as the leading responding actors. Second, any type of citizen-based collective action, even if not purely political, may be an issue of concern in authoritarian countries in particular. Accordingly, one can argue that, while citizens are struggling against a disaster, in some cases the traditional institutions may make substantial efforts to restrain and contain the action of citizens. In this light, the role of information technologies can include not only enhancing citizen engagement and increasing the efficiency of the response, but also controlling the digital crowd of potential volunteers.

The purpose of this paper was to conceptualize the tension between the role of ICTs in the engagement of the crowd and its resources, and the role of ICTs in controlling the resources of the crowd. The research suggests a theoretical and methodological framework that allows us to explore this tension. The paper focuses on an analysis of specific platforms and suggests empirical data about the structure of the platforms, and interviews with developers and administrators of the platforms. This data is used in order to identify how tools of engagement are transformed into tools of control, and what major differences there are between platforms that seek to achieve these two goals. That said, obviously any platform can have properties of control and properties of engagement at the same time; however the proportion of these two types of elements can differ significantly.

One of the core issues for my research is how traditional actors respond to fast, bottom-up innovation by citizens.[2]. On the one hand, the authorities try to restrict the empowerment of citizens by the new tools. On the other hand, the institutional actors also seek to innovate and develop new tools that can restore the balance of power that has been challenged by citizen-based innovation. The tension between using digital tools for the engagement of the crowd and for control of the crowd can be considered as one of the aspects of this dynamic.

That doesn’t mean that all state-backed platforms are created solely for the purpose of control. One can argue, however, that the development of digital tools that offer a mechanism of command and control over the resources of the crowd is prevalent among the projects that are supported by the authorities. This can also be approached as a means of using information technologies in order to include the digital crowd within the “vertical of power”, which is a top-down strategy of governance. That is why this paper seeks to conceptualize this phenomenon as “vertical crowdsourcing”.

The question of whether using a digital tool as a mechanism of control is intentional is to some extent secondary. What is important is that the analysis of platform structures relying on activity theory identifies a number of properties that allow us to argue that these tools are primarily tools of control. The conceptual framework introduced in the paper is used in order to follow the transformation of tools for the engagement of the crowd into tools of control over the crowd. That said, some of the interviews with the developers and administrators of the platforms may suggest the intentional nature of the development of tools of control, while crowd engagement is secondary.

[1] Asmolov G. “Natural Disasters and Alternative Modes of Governance: The Role of Social Networks and Crowdsourcing Platforms in Russia”, in Bits and Atoms Information and Communication Technology in Areas of Limited Statehood, edited by Steven Livingston and Gregor Walter-Drop, Oxford University Press, 2013. 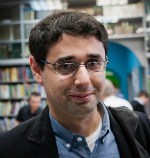 Gregory Asmolov is a PhD student at the LSE, where he is studying crowdsourcing and emergence of spontaneous order in situations of limited statehood. He is examining the emerging collaborative power of ICT-enabled crowds in crisis situations, and aiming to investigate the topic drawing on evolutionary theories concerned with spontaneous action and the sustainability of voluntary networked organizations. He analyzes whether crowdsourcing practices can lead to development of bottom-up online networked institutions and “peer-to-peer” governance.