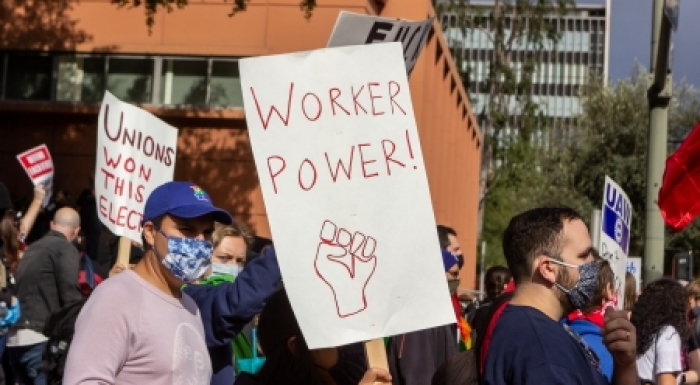 Last Tuesday, voters in California passed Proposition 22, a measure that allows gig companies to hire drivers and couriers as independent contractors, rather than as employees. A bill passed in the state in 2019, Assembly Bill 5, implied these workers are employees, and therefore owed a minimum wage, healthcare access, paid leave, and other essential benefits under U.S. and California law.

Proposition 22, also known as the “App-Based Drivers as Contractors and Labor Policies Initiative,” creates a precarious new class of workers who have neither the control of their work exercised by true independent contractors nor the basic rights and protections guaranteed to employees. Unlike true independent contractors, gig workers typically are unable to control their own work conditions; they must accept wages set by algorithms and worry about deactivation at the hands of the platform. Although Proposition 22 includes several concessions to workers, each provision provides an insufficient, watered down version of the full benefits of employment. For example, rather than receiving a minimum wage of at least US$12 per hour worked, workers will be guaranteed an average wage for the time they spend actively giving rides, coming to an estimated US$5.64 per hour worked. Rather than accessing an employer-sponsored healthcare plan, as they would receive as full-time employees, they will receive an additional payment which they can opt to apply toward the cost of a public health plan. And rather than participating in the publicly regulated and worker-friendly workers’ compensation program, they receive limited, privatized occupational accident insurance. Our earlier analysis of the provisions of Proposition 22 showed they do not meet the standards for fair platform work set forth by the Fairwork principles for fair platform work.

Gig companies poured more than US$205 million into promoting Proposition 22, more than has ever been spent on a ballot measure in U.S. history and more than ten times what was spent by opponents of the measure, backed by labor unions. These funds were poured into a massive advertising campaign, inundating Californians with mailers, billboards, and television, radio, social media, and in-app advertisements. Promotional materials claimed high levels of driver support, which were gathered from surveys which required workers to respond before accepting jobs.

Several indicators suggest voters were misled to equate a “yes” vote with improved working conditions. Polls showed 40% of “yes” voters thought the measure would bring living wages to drivers, indicating they cared about improving working conditions but did not understand the implications of the measure. Urban centers of the Bay Area, where both drivers and customers are concentrated, were more likely to vote no, suggesting much of the support came from other parts of the state where voters are more removed from day-to-day experiences of the gig economy but flooded with campaign messaging. As reflected by the state’s high minimum wage and relatively generous workplace protections, California voters tend to care about workers’ rights, but were denied accurate information about the implications of the measure.

Proposition 22 will most immediately impact California’s estimated one million gig workers. However, the greatest risk posed is the likelihood of similar measures being introduced elsewhere. Gig companies have a track record of trying to exempt themselves from labor laws; Handy, a cleaning and repair platform, lobbied for classification exemptions for gig workers, which were passed in seven states between 2016 and 2018. Uber, Lyft, and DoorDash have already expressed their interest in reproducing the measure in other states, and it could serve as a model in other countries where gig worker classification is under contention. A widespread third classification of workers, like that created by Prop 22, threatens to deteriorate conditions for workers across sectors and around the world.

Despite this threat, Proposition 22 is a rallying cry rather than a death knell. Workers have been organizing for better conditions since long before this election cycle, and their efforts were key to the passing of Assembly Bill 5 in 2019. Groups fighting Proposition 22, including Gig Workers Rising, Mobile Workers United, and Rideshare Drivers United, were up against a monumental challenge given the resources poured into the “Yes on 22” campaign. In addition, the pandemic made in-person demonstrations and canvassing difficult. Despite the outcome, the activism undertaken in these most difficult of circumstances reflects the strength of these workers. In the days leading up to the election, so many people volunteered to text and call voters, the phone banking system was overloaded.

This strength can be channeled to chart a new course toward fair conditions in the platform economy. The language of Proposition 22 requires a virtually impossible seven-eighths majority of the state legislature to amend. But what a ballot measure introduces, a ballot measure can take away. California’s ballot process is especially approachable; 600,000 voter signatures can get a new proposition on next year’s ballot. Beyond California, workers and advocates need to be prepared for the campaign of misinformation used by companies to build support for policies, including both as clear data as is possible on wages and expenses as well as worker stories that accurately reflect the experience of gig work. Clear information about the practices of gig companies can equip people with the knowledge they need to make informed decisions about where to work, which platforms to use, and when the time comes, how to vote.

Gig companies must be held accountable

Gig platforms offer the promise of on-demand services paired with easily accessible work. But their proliferation has been shepherded by corporations who promote the promise of profit over the plight of workers. Looking forward, platform companies need to be held accountable to the ways they treat workers.

The Fairwork principles offer a framework for comparing platforms and identifying which provide fair conditions under which workers can thrive. These principles—concerning workers’ pay, conditions, contracts, management and representation—were developed by researchers based at the University of Oxford, in collaboration with platform operators, policymakers, trade unions, and academics. The Fairwork framework is being applied as a comparable measure of decent work standards for the platform economy in over 10 countries. The Fairwork U.S. chapter will be launched in 2021.

At Fairwork, we also believe in the potential for meaningful regulation to hold platforms accountable and prevent a downward spiral of deteriorating worker’s rights. We support regulation that facilitates fair work standards for all gig economy workers, and evaluate legal efforts across the globe using the Fairwork Principles. Recently, we developed a Code of Good Practice for the protection of gig workers under South African law. We aspire to provide similar tools to help guide policymakers through the complexities of regulating digital labour platforms.