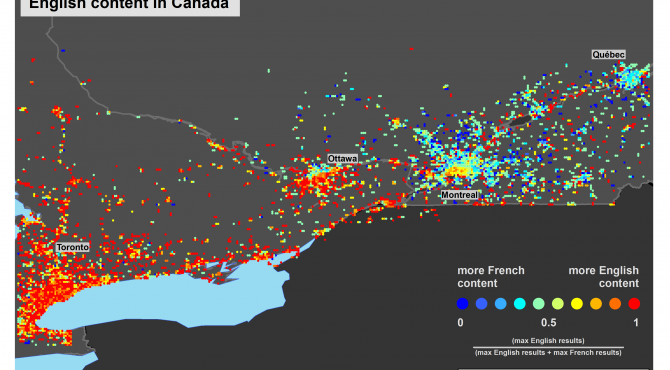 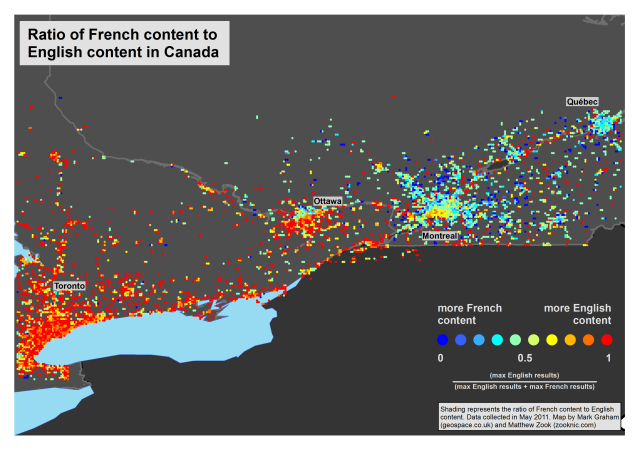 Image taken from: Graham, M and M. Zook. 2013. Augmented Realities and Uneven Geographies: Exploring the Geo-linguistic Contours of the Web. Environment and Planning A 45(1) 77-99.

I am very happy to announce that I paper that I co-authored with Matthew Zook has been awarded the Ashby Prize. The prize is presented by the journal Environment and Planning A for the most innovative papers published in the journal each year.

The full paper is available at the following link  (one perk of the prize is that the paper gets to become open-access):

This paper analyzes the digital dimensions of places as represented by online, geocoded references to the economic, social, and political experiences of the city. These digital layers are invisible to the naked eye, but form a central component of the augmentations and mediations of place enabled by hundreds of millions of mobile computing devices and other digital technologies. The analysis highlights how these augmentations of place differ across space and language and highlights both the differences and some of the causal factors behind them. This is performed through a global study of all online content indexed within Google Maps, and more specific analyses of the linguistically and topically segregated layers of information over four selected places. The uneven linguistic geographies that this study reveals undoubtedly influence the many ways in which place is enacted and brought into being. The larger aim of this project is to use these initial mappings of the linguistic contours of the geoweb to push forward a broader debate about how augmented inclusions and exclusions, visibilities and invisibilities will shape the way that places become defined, imagined, and experienced.

Our full response is published in the current issue of the journal.

We are delighted, honoured, and, honestly, surprised to be awarded a 2014 Ashby Prize. It is a wonderful affirmation of the work we put into the paper and our ongoing research on the geographies of information.

The paper started with fairly simple (yet fundamental) questions about the blurred boundaries between our material and digital lives. Namely, where and under what conditions do these worlds intersect? How do they vary across space and language? And how do we explain these patterns? The paper is interdisciplinary in nature and attempts to draw from, and speak to, Geography, Internet studies, Urban studies, and Communication studies. The piece builds heavily on our earlier work on the hybrid nature of material/digital places (see Graham 2011, 2013 or Zook and Graham 2007a, 2007b): arguing that the lines between digital signifiers and the material signified are becoming increasingly blurred as digital content is tightly enrolled into our spatial experiences.

While rooted in a process tracing back decades to the first satellite imagery and GIS projects (or even millennia if one includes annotations to the material environment such as petroglyphs), the connections between places and information related to them have been made particularly visible and usable over the past ten years. The emergence of crowd-sourced information as well as large professional databases, the ubiquity of all manner of sensors, and the recording of ambient data documenting everyday geographies has created a world that is increasingly augmented by digitally stored, geotagged information. This fact coupled with the ready-availability of interfaces (e.g. Google Maps, Wikipedia, Tripadvisor) through which we can access this information, whilst we’re in the very places being portrayed, has meant a diffusion of the power to create and use spatial representations; an ability once largely limited to a few. In short, digital augmentations are profoundly imbricated into our everyday lives and places.

The augmentations, however, are neither uniform or unidirectional and can both highlight and hide information. Articulating these dual process of uncovering and obscuring is the main goal of this paper, as language is a particularly ready indicator of the unevenness of digital representations. The world, as seen through lens of a search engine or location based service, for instance, simply appears differently depending upon the linguistic contexts through which you engage. The power of maps and spatial representations endures. But the levers through which this power is enacted are now embedded in lines of software, designs of platforms, availability of data sources, and opaque (and often decentralized) governance and production systems, rather than the pen and ink of cartographers or the interests of centralized states or competing elites.

Eventually, information is not only providing the raw material for creating representations of places but actively engaged in augmenting them whilst they are being enacted and brought into being; a theme that we explore in much more detail in a parallel paper on augmented realities we wrote with our colleague Andrew Boulton (Graham, Zook, and Boulton 2013). Today, many people don’t think twice about conducting a spatial search for restaurant or being given bespoke directions home from our precise location. But less than a decade ago, these spatial services were largely limited to GIS labs. We still remember the excitement with which we greeted the first virtual globes and the extreme novelty of a map based search. Moreover, we’ll admit to literally spending hours simply entering a range of search terms and locations into Google Local (an early branding of Google Maps) simply to better understand how this new and monumental thing worked and how parts of the world were both revealed and hidden in these representations.

The principle point of all our this work is that the digital layers of places need to be better interrogated. We need to understand what they include and exclude; what they show and don’t show; who does and doesn’t participate in their creation; and what people, platforms and algorithms have a hand in filtering, ranking, and censoring that content. In short, digital dimensions have become key variables for studying all kinds of human geographies, and it is important for researchers to better understand their connections to spaces and places.

Our paper was an attempt to address some of methodological and theoretical issues associated with informational geographies. Using a relatively simple set of software scripts to collect data, we were able to show both that some parts of the world are surrounded by much denser layers of digital information than others, but also the variable nature of this content within places as certain people and languages had considerably more data available to them. In other words, the paper highlighted a number of the balkanised bubbles of augmented information that have important implications for the enaction of material balkanised spaces; a point we take up in later work (Graham, Zook, and Boulton 2013; Zook, Graham and Boulton, 2014). Clearly, these are early days in this body of research and we look forward to many and fruitful exchanges with the growing number of geographers engaged in this work.

As with all academic pursuits, this paper did not emerge from a vacuum and we would like to recognise the broader conversations in which our paper is embedded. The initial draft of this paper was targeted at a 2011 conference held in Oxford by the Oxford Internet Institute — “A Decade in Internet Time: symposium on the dynamics of the Internet and society – and the interdisciplinary nature of the event helped broaden our vision about who we hoped to engage. That conference paper was subsequently reworked for a special issue of Environment and Planning A on ‘Neogeography’ put together by Matthew Wilson and Mark Graham (Wilson and Graham 2013) which provides valuable context to this work. For example, the special issue also is the home for a selection of papers that address important questions about crowdsourced cartography, the ‘democratisation’ of knowledge production, and power in decentralised networks.

We hope that our paper, and the special issue of Environment and Planning A to which it belongs, become the beginning of a sustained and extensive effort to critically tackle questions about the digital and augmented facets of our lives. But, even as mobile devices and information services become ever more prevalent, our abilities to recognize and research face serious challenges. Many digital layers are opaque, invisible to the naked eye, locked away in closed and ephemeral databases, and tightly controlled by entities that have no interest in critical research. For instance, how and why exactly does Google rank the results of spatial searches? How are these results personalized? How are our updates to social media being captured, processed and repurposed? Are we being subtly directed away from parts of the city based on our social networks and search histories? These are just some of the key questions in this area, and we believe that it is precisely our role as geographers that requires us to constantly attempt to understand how datasets, data intermediaries, systems, platforms, devices, algorithms, and networked crowds work to influence the digital augmentations to our everyday lives and geographies. Maps have power; which makes personalized geovisualizations all the more potent, and understanding the processes behind this, all the more important.

We would like to end with some words from Tony Benn, a British Labour party politician who sadly passed away earlier this year. He famously had a set of five questions that he said that we should always ask any powerful person: “What power have you got? Where did you get it from? In whose interests do you exercise it? To whom are you accountable? And how can we get rid of you?”

Perhaps we should attempt to more explicitly adopt those questions to research into the powerful platforms, algorithms, and systems that govern and structure our networked interactions. We hope that our paper has contributed towards that goal, and we’re excited that so many of our colleagues and collaborators are also working towards those aims.

Zook, M. and M. Graham. 2007b. Mapping DigiPlace: Geo-coded Internet Data and the Perception of Place. Environment and Planning B. 466-482.