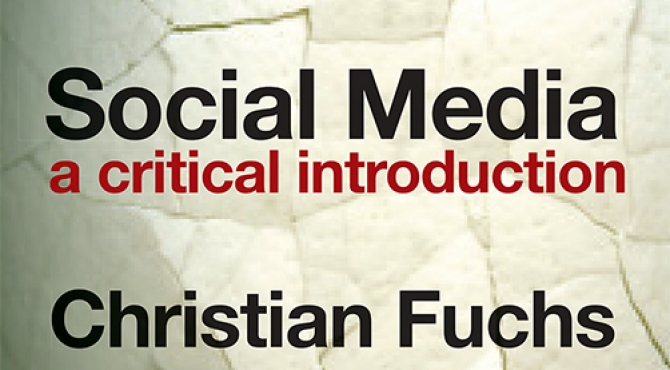 This is the draft text of a response that I gave to a Book Colloquim on Christian Fuchs’ “Social Media: A Critical Introduction”. The text differs somewhat from a transcript, but I’m posting it ere at the request of several in the audience. 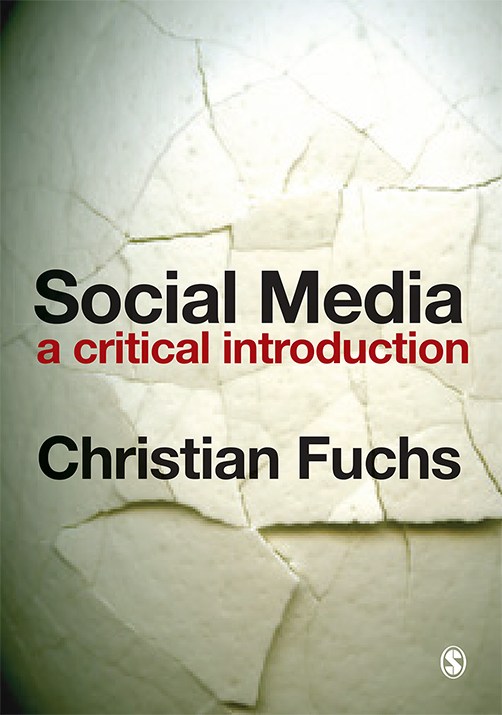 I’m a research fellow at the Oxford Internet Institute. For those outside the department or the university this is much like an assistant professor position. I came in as someone who was versed in the nitty gritty of technology as a programmer and a theoretical sociologist of human relationships. One of my first agenda items when I was here was to retool a mechanism for capturing social networks. Where we once did a pen and paper technique, I thought we might be able to capture such data from Facebook. Several peer-reviewed substantive papers and a few theoretical book chapters later, however, I have had to move on from this work. Why? Facebook have decided that access to this social graph will no longer be available outside Facebook.

I was heartbroken. I spoke to several members of the data team, almost all of whom suggested that I request data and work with them directly. In dealing with that moment I could draw on the spirit that infuses Fuchs’ Social Media. You see, I was not interested in helping to tune their machine, nor am I interested in playing Big Data overlord. The joy that emerged in my research occurred when people were able to see, navigate and interact with a clear social network representation of their own network. It is not that I want their data, it is that I wanted users to be able to see and control their data themselves. I wanted to study how people appreciate their digital self-representations, not merely to tell people what they should appreciate based on analysis through the one-way mirror.

Networks are collective objects – two-way links are formed from the productive labor of negotiation. I request, you accept, and in that mutual acknowledgement we collectively create a wondrous object that bear striking resemblance to our (pre or non-Facebook) social world. Facebook will let me export most of my data, except these relational objects. I own what I submitted (even if I grant Facebook a non-transferrable licence to use what submitted). But when I coordinate on Facebook, who owns the emergent relational objects. Who owns the friendship. While it was never quite certain before April of this year, the answer from Facebook’s point of view is now clear: Facebook does.

Fuchs book does much to provide a language to understand this dilemma. How am I supposed to build a better future while tethered to an industry that surreptitiously absorbs increasing amounts of data about me only to give this data back in the view that they see fit? To move forward in ways that are not merely tuning the machine, we must adopt a critical lens towards the modes of production that infuse our online behaviour and never be naive to the inherently antagonistic class positions lurking behind the rhetoric of prosumers, participation and wise crowds.

But if we are never naive, it is easy to slide towards cynicism, particularly from a Marxist or neo-Marist standpoint. And it is here that I wish to hear more from Fuchs than I have in this book. Like him, I am intensely intrigued by this synthetic data-driven arrangement of social relations. The low-cost to entry, the low marginal cost of reproduction, the liberator potential of writing oneself into being and the non-rival nature of information mean that the Internet may be our best chance of envisioning a positive future. Of course there are caveats, such as the awareness of the material cost of creating the servers and storage, as well as the often exploitative labor involved in making these gadgets. Fuchs acknowledges these negative aspects, such as in his critique of Jenkins. But Fuchs’ does more than merely acknowledge these drawbacks, instead they seem to permeate his assessment of most all aspects of culture online. He trades false consciousness for a sharp but ultimately cynical outlook. In particular, he has stigmatised not only the corporations that power much of social media, but those who would not directly and vociferously reject them, Jenkins and his clan most of all. Stigma, going back at least to Goffman, is a mechanism whereby identities are marked and contaminated. They taint and precede.

One of the dangers of stigma is in how it discounts or dismisses the whole on account of an evaluation of the part. Fuchs has decided where he stands on this issue: a huge swath of social media is tainted by its capacity to reinforce capitalism and extract surplus value from consumers. In here prosumer is a dirty term and participatory democracy has really missed it’s mark. In here, the Internet is not merely a second skin or a virtual space. It has distinct power. He is concerned with a whitewashed theorisation that “does not much engage with or analyse the downsides of the Internet such as the economic crisis”. And in this phrase on page 58 is where the seams start to show. Fuchs is quick to dismiss Jenkins, because of Jenkins’ funding, because of his marketing-ready language and his use of participation. Yet on Fuchs’ own opinions we are asked to buy wholesale into the idea that the Internet is the cause of the 2008 economic crisis.

These wholesale ideas appear continuously through the book. We are asked to dismiss his feigned antagonists for their attempt at nuance and then to accept his broad ideas with only the most minimal of qualifications. Wikipedia, he suggests, is as close as we have to communism. Yet, Wikipedia is also a space that relies on donations, has serious problems with gender and racial politics, and has a deep and likely expanding antagonism between Wikimedia, who owns the servers, and the Wikipedians, who primarily govern and edit the site. Wikipedia infuses Google’s knowledge graph and Facebook’s object graph. As I have discovered in extensive work on the site (particularly in trying to promote Arabic content), Wikipedia is far from egalitarian in theory or in practice. Petty politics do interfere.

One of the more interesting discoveries in my work on Wikipedia is how relevant sources are to the creation of knowledge. Wikipedia is never supposed to be an original source on a topic. The absence of thousands of towns, churches, and key historical sites persist because those who protect the site from spam also protect it from unverified articles. Yet, the source material that would come from the state is simply not available in many poorer parts of the world. Sudan does not regularly post an index of all towns, their populations and their geocodes, so Wikipedia cannot extensively post this. Thus, while Wikipedia is successful in its own domain, this domain is encapsulated within an unequal world. Neither Wikipedia nor Twitter are ideal types for their various modes of production. And I honestly believe that subversive, revolutionary and hegemonic forces can and do operate in both.

I recall as an early undergraduate awakening to the sociological imagination. My budding awareness of how gender, power, history, class, ethnicity, labor, roles and their ilk infuse everything was overwhelming. Sociology was at first like putting on 3D glasses. Everything was there, but the depth was suddenly so vivid.

So imagine the delight of my parents when I informed them of how obviously they were enacting middle class petit bourgeoisie western gender norms. I saw fit to chastise them for their ignorance. For I have read of Marx, Weber and Durkheim. But of course, a little knowledge is a dangerous thing. I’m sure now I was insufferable.

Let’s be clear, I consider Fuchs work to be enlightening, sharp and focused. But in the wrong hands, this text could also be deeply cynical and righteous. Those of us with the burden of awareness; the burden of knowing how machine learning algorithms steer us to certain friends on Facebook; those who know the dark patterns that encourage us to click on ads on Google; those with the knowledge of when and how our persistent traces are indexed and perverted; we must press on. But we must press on in a micro social way, not merely as those who enact macro social political ideologies. Yes, there is more entertainment than politics on Twitter, but must we always be manifestly political? If there was more politics than entertainment, would we not exhaust both ourselves and the emotional energy of those around us? How do we press on with open source and commons based models without alienating those around us who cling to windows or mac? How do we accept those who have made compromises, as indeed we all have in our everyday lives? Where do we find, as Negri and Hardt so romantically suggested at the end of Empire, the irrepressible lightness and joy of being communist?

I content that if anything is lacking from the world today it is charity and good faith. As a medium where meanings are continually stripped of context and reframed in sound bites and click bait, it is easy to fall into a world of certitude. ISIS are evil, Men’s Rights (or Feminists) are irrational, conservatives or liberals are going to ruin this country. But we are more than our ideas and even more than our productive capacities. Much like the easily worked up internet warrior, Fuchs runs the risk of valorizing that which he appreciates and demonising that and those whom he dismisses. The love for our fellow humans, their productive capacities, and the preciousness of their very being, must not be tainted by the stigmata of their social location or the compromises they have made in participating in social media as it exists today. I believe Fuchs knows this, but I fear that those who read his work may forget. Indeed, he suggests another Internet is possible, but it must come from an explicit, rather than implicit, love of those who have created what we have before us, even our greediest enemies. To work together, we must transcend that which keeps us down, we must reflexively acknowledge ourselves as co-created by our online participation. We cannot discount ourselves and our fellows because we participate in (and often enjoy) media that are embedded in the logic of capitalism. We must draw strength from our collective will as it is manifested now, in spite of the ways it is tainted, rather than wait for this collective will to catch up to our visions of the future.

Note: This post was originally published on Bernie Hogan's blog on 10 October 2014 5:11 pm. It might have been updated since then in its original location. The post gives the views of the author(s), and not necessarily the position of the Oxford Internet Institute.