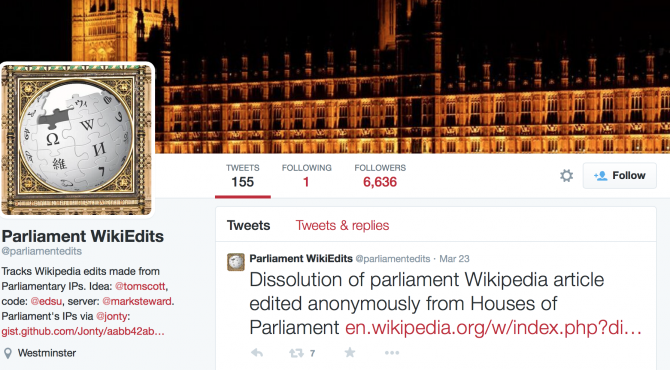 Wikipedia places among the top Google results for almost all topics, including political parties and politicians.

Wikipedia places among the top Google results for almost all topics – including political parties and politicians. This is why the OII’s Social Election Prediction Project exists; when voters seek information before an election they may turn to Wikipedia. Yet the earliest days of Wikipedia featured little political content. While the site itself was founded on January 11th 2001, the first page for a political party appears to be that for the Green Party of the United States, created months later, on September 19th 2001. Early contributors were perhaps more interested in, or more interested in spreading information about, fringe parties as fellow minority party the Libertarian Party in the United States also had a Wikipedia page before one was created for the Republican or Democratic parties.

Today contributors are quick to update Wikipedia political pages after elections and there is even often a Wikipedia page dedicated to the election itself. Several weeks ahead of the UK General Election for example, the Wikipedia page for it is already thousands of words long, full of descriptions of the leader debate and various seat predictions. However, Wikipedia did not cover the UK General Election back in 2001. The pages for the Conservative and Labour parties were not created until well after the June election of that year. (Interestingly the pages for those two parties and the page for the Liberal Democrats were all created on the same day, October 11th 2001.)

While Wikipedia might currently be a quickly updated source for political information, the medium’s open-editing policy has created some controversies as political figures around the world have been accused of favorably editing their own pages. In 2014, Hindustan Times covered a number of  Indian politicians with suspiciously clean Wikipedia pages ahead of state elections, writing “The profile of former Mayor and Shiv Sena corporator Shraddha Jadhav, who has been eyeing the Sion Koliwada assembly seat, mentions that she is known for her ‘elegant dressing’, her ‘fashion sense’ and ‘her crisp cotton sarees’, along with describing her as an articulate corporator.” but that the Wikipedia page “has no mention of the controversies that plagued her term as well as that she lost a by-poll she had contested in 2006.” The descriptors still remain on Jadhav’s page, perhaps because they are cited to an article from the Hindustan Times itself.

In 2006, the Massachusetts newspaper the Lowell Sun reported that a staff member in the office of the U.S. Representative Marty Meehan had tried to replace the congressman’s entire Wikipedia page with a staff-written bio. Wikipedia political pages can be edited to troll as well as just to mislead. In 2014, users from inside the US Congress were briefly banned from editing Wikipedia altogether after a contributor added content that “accuse[d] Donald Rumsfeld of being an alien lizard and Cuba of faking the moon landings.”

Tools such as ParliamentEdits and CongressEdits, in the UK and US respectively, help monitor politically motivated edits. The tools are automated Twitter accounts that tweet out anytime a user associated with an IP address within the legislatures edits Wikipedia. Inspired by the first such tool, ParliamentEdits, people have created similar Twitter bots for the legislatures in Australia, Israel and Greece. The openness of Wikipedia is what allows for political tampering but the site’s transparency is also then what enables watchdogs to pinpoint actors behind fishy edits.

There are many countries where government officials hold influence over the press; but no information source that allows to users to trace the trail of the article creation as easily as Wikipedia.