I am giving a presentation tomorrow at the IJPP conference here in Oxford. It’s being hosted by the Reuters Institute who are world leaders in the study of contemporary news organisations, and I’m really excited to be going.

Together with Scott Hale I am giving a presentation on the “history” of social news. We have an 8 year long dataset (2002-2010) consisting of links to millions of news articles which we have used to trace the beginnings of social media news sharing. We are interested to know whether the types of news being shared have changed over time as social media platforms have massified; we’re also interested in looking at whether site design changes (such as bringing in sharing buttons) have had a major impact. 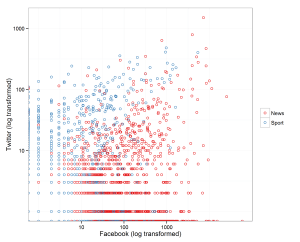 The project is at an early stage but the results are pretty interesting so far (to me). To give one tidbit, we show that in this large scale dataset there is only a weak correlation between sharing on Twitter and Facebook at the article level, with Twitter tending to share more sports news than Facebook (see image).