Thank you to everyone who participated in our experiment on the effects social information in the Gillray ‘Love Bites’ exhibition on Friday night. Here we explain the background to the experiment, and present the results.

Research shows that when we know that other people like something, it makes us more likely to like it too. This ‘social information’ about other people’s preferences plays a role in all kinds of social and political behaviour; for example, the (as it turned out, wrong) opinion polls are likely to have influenced how we voted in the general election. Now that we all spend so much of our time on social media, such as Facebook or Twitter, we are bombarded continually with this kind of information about what other people like, share, follow, support or view. So understanding how this information affects how we think and what we do is especially important in the age of social media. An experiment of the kind we ran in the Gillray exhibition at the LiveFriday event at the Ashmolean museum on May 12th is a good way to work out the effect of different kinds of social information.

Our volunteers asked visitors to select their favourite picture from the ‘kisses’ section of the gallery using iPads. The iPads were a key ingredient of the experiment because each time someone went to vote that person was randomly shown one of two interfaces on the iPad. In the ‘control’ group, people were shown the pictures without any further information. In the treatment group, people were shown the same pictures, but with ‘social information’ in the form of the current number of votes each picture had received along with an extra ‘badge’ signally the top three pictures. All pictures in both groups started the evening with zero votes.

The data support this hypothesis. We looked at two measures of the overall distribution of votes. First, the standard deviation in the number of votes per picture is significantly higher in the treatment group compared to the control group.1 Second, the Gini coefficient, a measure of inequality, is also higher in the treatment group than in the control group (36.83 vs 19.62). 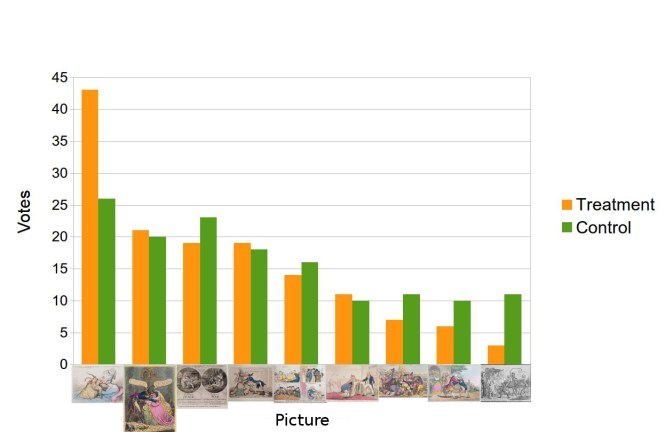 Number of votes per picture in the treatment and control groups

In addition to recording the total number of votes, we also recorded the order in which (and time at which) each vote was cast. If we plot the total number of votes sequentially,2 we can see that the goat picture was distinguished early in the evening clearly separating away from the other photos in the treatment group. In the treatment group, the photo was in the top position for almost the entire evening. In contrast, the pictures are much closer together in the control group and there is much overlap and changes in rank. 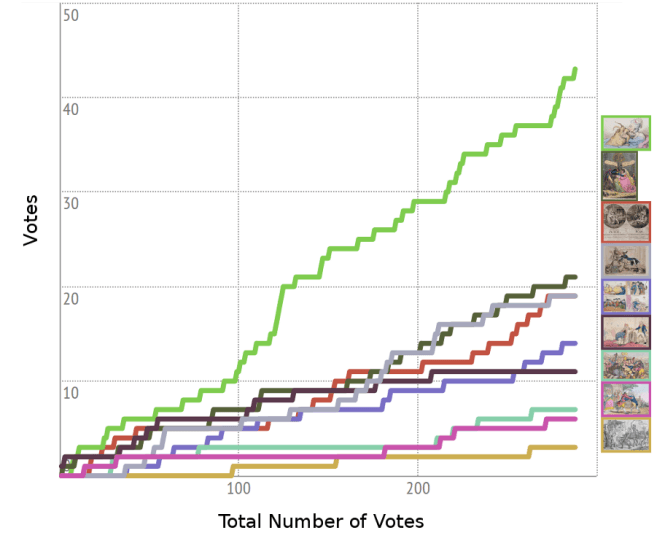 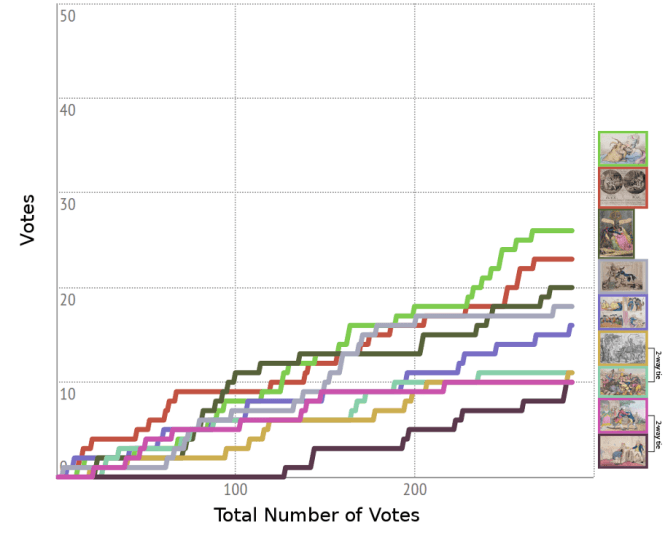 So we can see that the social information had a reinforcement effect, making the most popular picture more popular and the least popular picture less popular. This kind of reinforcement effect can be observed in many kinds of cultural markets, such as the music industry, as well as in some commercial markets and political contests. It leads to instability, as support lurches from one product, cultural artefact, or political representative to another. Experiments of this kind that help to understand the role played by social information can be helpful in terms of anticipating or even designing out that instability.

1. The standard deviation in the number of votes per picture in the treatment group was 11.99, while it was 6.03 in the control group. This is a significant difference as established with an F-test leading to a F-value of 3.92 and a corresponding p-value of 0.03↩

2. The votes are occurred in bursts: there were some busy periods with many votes and other less busy periods with fewer votes. For this reason, we plot the total number of votes (in either group) on the x-axis rather than plotting the actual time the votes were cast.↩