What’s up with Montana? Comparing Google and Wikipedia in the US 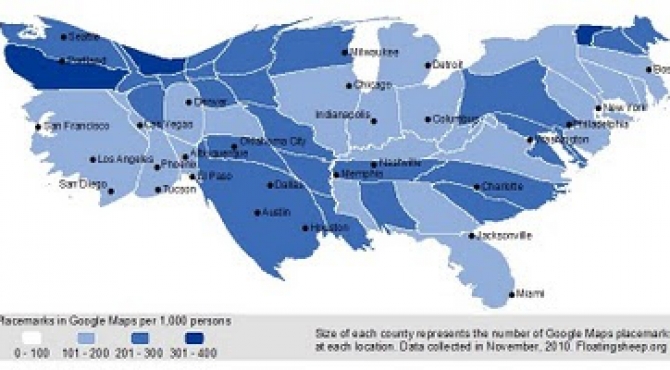 As mentioned in an earlier post we’re starting to have some fun with cartogram representations of geoweb data. For those who have forgotten, cartograms distort geographical areas based on the proportional value of some characteristic.

In the two cartograms below the characteristics used to determine size are (1) Google Maps placemarks and (2) the total number of geotagged Wikipedia articles. The distortion was done at the county level and include the 48 lower continental U.S. states. The coloration represents the relative number of geotags/placemarks by population. This gives a better understanding of the distribution of geotags/placemarks both by population and by area.

While many of the results are expected — California is bursting with geoweb goodness no matter what the measure — there are some intriguing differences between the distribution of wikipedia and Google Maps placemarks. 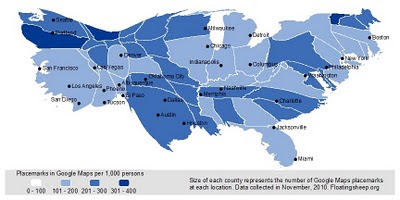 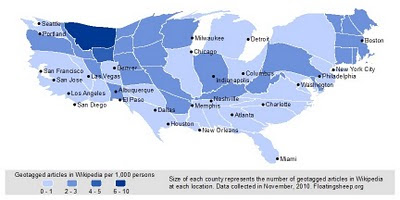 For example, Texas, Florida and North Carolina are bulging with placemarks but slim tremendously when you consider wikipedia entries. In contrast, New York and Vermont seem to have proportionally more wikipedia than Google Maps placemarks.

But the biggest contrast between these measures is Montana whose size balloons tremendously when you move from placemarks to wikipedia entries. We’re really not sure what’s going on with Montana and so invite folks to take a closer look. We suspect it has to do with someone (or perhaps some automated bots) who were/are extremely dedicated to documenting EVERYTHING in Montana. Interestingly this dedication does not extend to the neighboring states of North and South Dakota or to creating placemark entries for use in Google Maps. 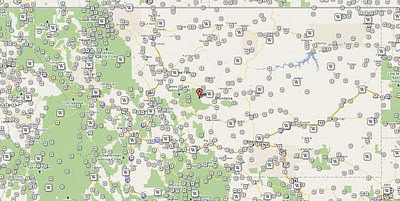 In any case, these cartograms and the case of Montana highlights how diverse each digital layer within any place’s cyberscape can be.

UPDATE: Thanks to commenter Mongo for pointing us to the page for the WikiProject Montana, where questions emanating from this blog post have uncovered that a couple of diligent Wikipedians (one of them being Mongo) have been geotagging all kinds of stuff out in the Big Sky country. So thanks for passing the info along and proving our hypothesis about the bots to be wrong!