As part of our study, we discuss our findings in academic forums and at international conferences, such as the Association of Internet Researchers‘ (AoIR) yearly conference, which happened to be located in Daegu, South Korea this year. I had the great pleasure of representing our team at this conference and to visit South Korea for the first time. According to the Akami Report on the State of the Internet, South Korea has, on average, the fastest internet in the world. Researching slow internet connections, this was an especially interesting point of my visit to Daegu, which is located about 240km south-eastern of Seoul.

Apart from indulging in the Korean culture, I was particularly interested in experiencing internet connectivity in this apparent connectivity-“promise-land.” Wi-Fi was available quite literally everywhere in the country, including trains, all cafés, restaurants, malls, train stations, airports, etc. In most of these places, Wi-Fi was free and unlimited, and almost everyone we met used smart phones, including taxi drivers. All hotels, of course, had free Wi-Fi, but some of the older hotels were struggling with thick walls and unfavourable layout so that we encountered slow and unreliable connections in some of these older buildings. However, “slow” needs to be put in context here. As I wrote parts of this post (in one of the newer hotels in Daegu), my download speeds varied between 6.76-40.06 megabits per second, while upload speeds varied between 5.28-11.74 megabits per second, and this was in the middle of the working day, i.e. when everyone else in Daegu (and in the hotel) was online as well–speeds that most households in rural Britain can only dream of. According to a CNN report from 2010, South Korea is far ahead of most other developed countries as it set a plan to commit to fast internet speed in the 1990s–many years ahead of the United Kingdom. However, population density is a lot higher in South Korea (more than 1,200 inhabitants per square mile) than in the United Kingdom (around 650 inhabitants per square miles), which makes it easier to connect many more homes with fibre (Population Density per Square Mile of Countries). 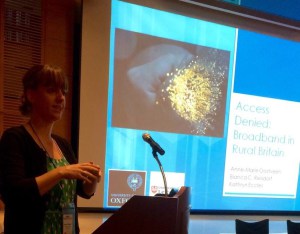 A jet-lagged Bibi Reisdorf presenting our preliminary results at AoIR

The conference itself was focussing on Boundaries and Intersections, so that our presentation on initial findings fit right in. When we presented some facts and quotations from our first round of interviews, the reactions from the (mainly academic) audience varied from surprise to disbelief at the problems that our interviewees are facing with their patchy and slow internet connections. The feedback was extremely positive and supportive for this project, and we gained some nice insights into similar projects from other countries, e.g. Australia.

We are now extra-excited to go into our next round of data collection in January and February, so watch this space for more results from our fieldwork and insights from both affected Britons and expert interviews. 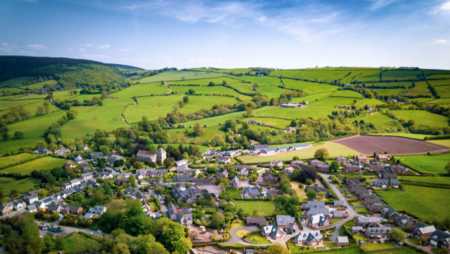 By using interviews and focus groups this project will focus on how people living and working in rural areas are affected by the unavailability of adequate Internet connections.