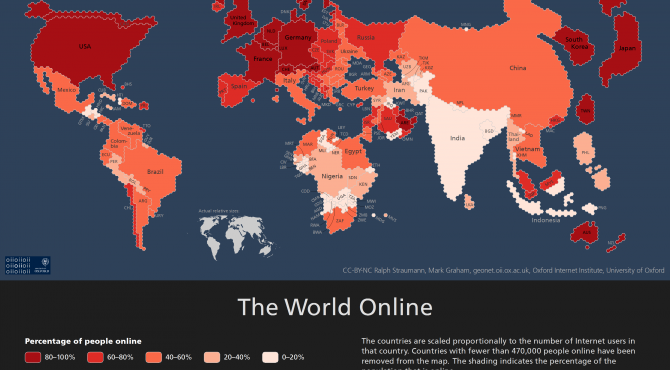 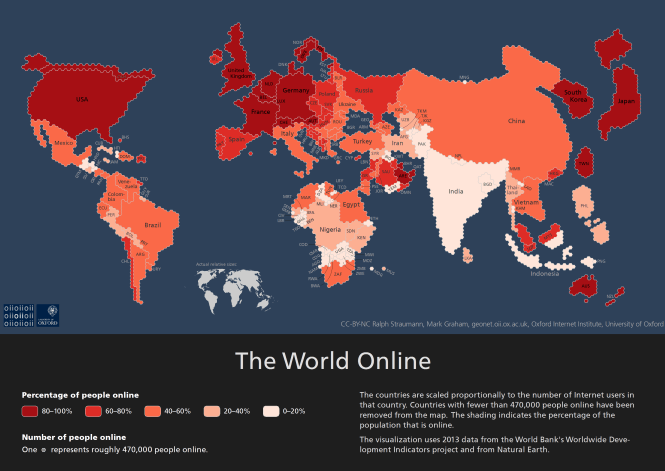 This map shows the total number of Internet users in a country (size of the country) as well as the percentage of the population that has Internet access (shade of the country). It is an update of our 2011 visualization.

The map uses 2013 data on Internet users and population that was obtained from the World Bank. The World Bank has tracked the number of Internet users per country since the 1990s as part of its Worldwide Development Indicators project.

The data is visualized using a hexagonal cartogram (a distorted map). In this cartogram, the size of each country is drawn based on the absolute number of its Internet users, while keeping the countries’ and continents’ shapes as close to their true shape as possible. Each small hexagon accounts for about half a million people online. Countries with fewer Internet users do not show up in the cartogram. Note the small inset map showing the actual relative sizes of the continents. The shading of each country in the cartogram represents the share of the population that has Internet access (the so-called Internet penetration): darker shades indicate higher rates of Internet access among the population.

The distortions in the map paint a revealing picture about human activity on the Internet. Looking at the largest Internet countries and regions, we can identify a few key findings:

First, the continued rise of Asia as major home region to the world’s Internet population. At 1.24 billion users, 46% of the world’s Internet users live in Asia. That is roughly equal to the number of Internet users in Europe, Latin America & Caribbean, Middle East & North Africa, and North America combined.
China is home to the world’s largest Internet population of a country at 600 million people. The United States, India, and Japan then follow as the next most populous nations of Internet users with 270 million, 190 million, and 110 million people online, respectively. I.e., even put together, the US, India, and Japan are home to fewer Internet users than China alone – despite the fact that a majority of Chinese people have never used the Internet. 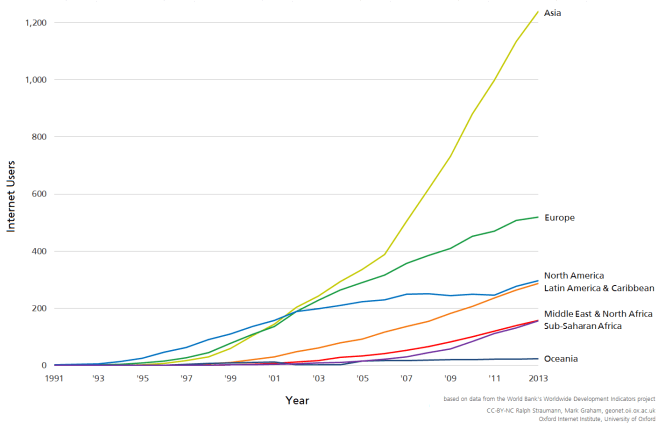 With these findings in mind, it is important to realise and remember that despite the massive impacts that the Internet has on everyday life for many people, most people on our planet remain entirely disconnected. Even today, only a bit more than a third of humanity has access to the Internet.

Note: This post was originally published on the OII's Geonet project blog on 8 July 2015 12:07 pm. It might have been updated since then in its original location. The post gives the views of the author(s), and not necessarily the position of the Oxford Internet Institute.