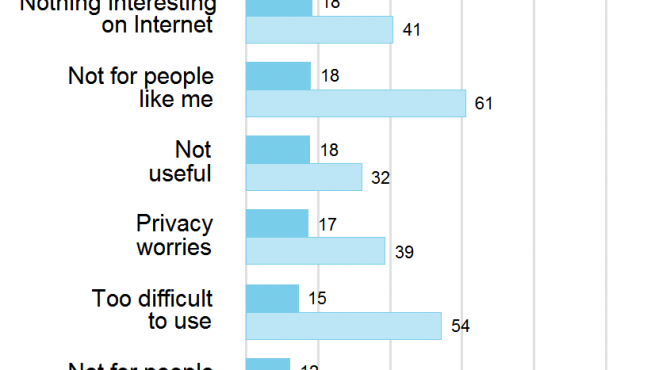 After showing some of the characteristics of non- and ex-users of the Internet, this post focuses on reasons why they say they do not use the Internet. We will investigate what prevents people from trying out the Internet or stop using it in the next couple of blog posts.

By contrast, a vast majority (83%) of non-users said that they are just not interested in using the Internet. The other two leading reasons for staying offline are not having a computer available and not knowing how to use the Internet. About 50% of non-users also believe that the Internet is not for people like them or for people of their age. This is so similar to not being interested that we combined those responses in the Report. About 50% also say the Internet is too expensive and difficult to use. Overall, non-users indicate a broader range of reasons for not using the Internet than ex-users. The latter are more likely to report physical constraints preventing them from using the Internet, whereas non-users lack the interest and skills to go online. These are important insights for understanding the dimensions of the divide between online and offline populations.

Reasons ex-users and non-users do not use the Internet

Respondents were also asked which reason was the most important. The graph below confirms that non-users are mostly not interested in using the Internet – 62% indicate the lack of interest and lack of usefulness as the decisive factors. On the contrary, for 38% of ex-users the most important factor was the expense and a further 27% said they did not have a computer or an Internet connection. 26% state they are not interested in using the Internet. Once again, we can conclude that perceptions about the Internet are the biggest constraint in getting people online for the first time, while those who have used the Internet before lack financial and physical resources to continue doing so. 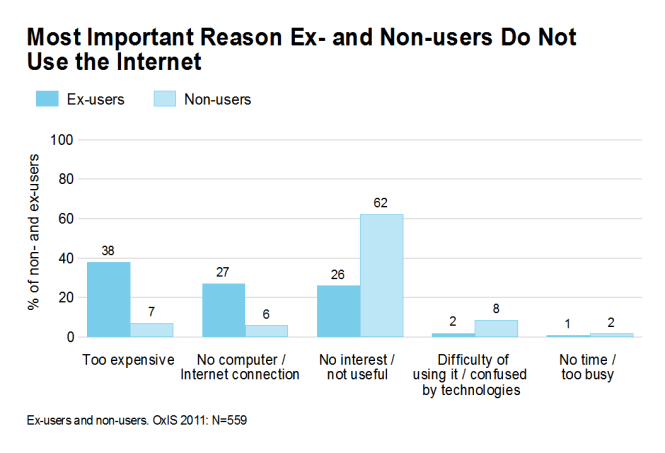